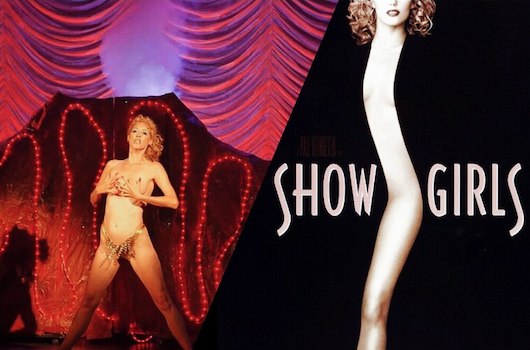 Off the CUFF: YOU DON'T NOMI + SHOWGIRLS Double Feature

YOU DON'T NOMI traces SHOWGIRLS (1995) redemptive journey from notorious flop to cult classic. After the documentary, we're presenting Paul Verhoeven's 1995 film – decide for yourself if SHOWGIRLS is pure trash, a masterpiece, or a bit of both.

YOU DON'T NOMI
USA, 2019, 92 min
Paul Verhoeven's SHOWGIRLS (1995) was met by critics and audiences with near-universal derision. The documentary YOU DON'T NOMI traces the film's redemptive journey from notorious flop to cult classic, and maybe even masterpiece.

“Via clever, connect-the-dots montage of superbly chosen clips, and a full spectrum of opinions from both admirers and detractors, YOU DON'T NOMI makes a compelling case that the much-maligned pop-culture landmark can be judged as either tawdry rubbish or subversive comic triumph.” – Hollywood Reporter

"NOMI leaves it up to audiences to decide if SHOWGIRLS is trash, a masterpiece, or a "masterpiece of trash," but one thing is certain: no matter how good or how bad one considers the film's objective quality, one can enjoy Showgirls all the same." – POV Magazine

SHOWGIRLS
France / USA, 1995, 131 min
Nomi, a young drifter, arrives in Las Vegas to become a dancer and soon sets about clawing and pushing her way to become the top of the Vegas showgirls.