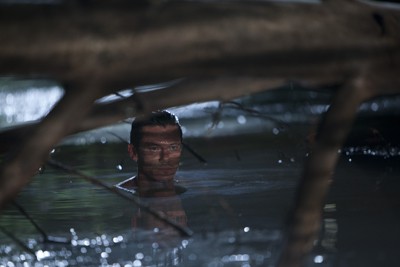 From Ryûhei Kitamura, the mastermind behind Versus and Midnight Meat Train, comes No One Lives, an outrageously gory horror-thriller chock full of creative kills. A brutal massacre leaves 14 students dead and the local police without a clue as to the whereabouts of young heiress, Emma, who may be the sole survivor. Many months later, a
clan of backwoods bandits, headed by stern patriarch Hoag, runs a vacationing couple off the road in a routine highway robbery, only to discover the frightened Emma in the couple’s custody. The bandits think they’ve hit the jackpot given the promise of a hefty reward for Emma’s rescue — but it turns out these hillbilly gangsters are rank amateurs who have just kicked a hornet’s nest. Soon enough, everyone is sent running for their lives from an even greater danger than they
could have imagined.

press for No One Lives

"A smart and original horror movie with, at its heart, a killer in the grip of a dark and twisted love affair."

"Be prepared for some of the most outrageous and bloody action ever."

Six adventurers go on a quest for a mystical cemetery and trigger an ancient curse that will destroy the entire world.