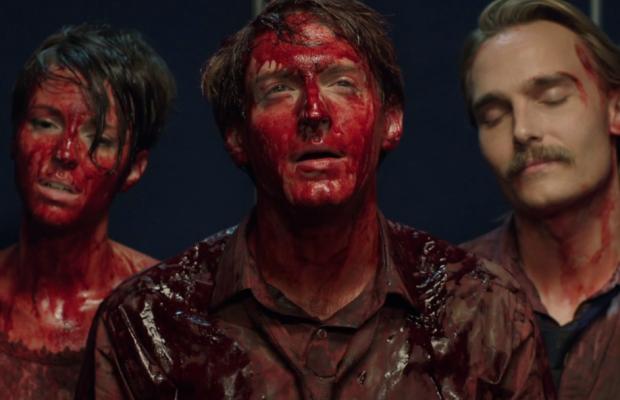 An Office Space meets SHAUN OF THE DEAD action-packed vampire comedy, BLOODSUCKING BASTARDS stars Fran Kranz (CABIN IN THE WOODS) as Evan Sanders, a dutiful and overworked employee stuck at a soul-killing corporation with his beautiful co-worker and girlfriend Amanda (Emma Fitzpatrick of THE COLLECTION) and his slacker best friend Tim (Joey Kern of SUPER TROOPERS). Evan’s world begins to crumble when Amanda dumps him and his boss Ted (Joel Murray of MAD MEN) hands his coveted promotion to his nemesis Max (Pedro Pascal of GAME OF THRONES). When his officemates start going through disturbing changes and bodies begin to pile up, Evan must find a way to stop the evil brewing amidst the cubicles and water coolers, win back Amanda, and rescue his workplace pals before his life and career go from dead-end… to just dead.

"This is the next big thing in cult comedy classics and an absurd amount of fun."

"Bloodsucking Bastards is a special kind of horror comedy that both goes for the jugular and tickles your funny bone in delightfully inventive ways, while giving us the next big catch-phrase to boot."

A husband gets more than he bargains for when he picks up a mysterious crow totem off the ground, much to his wife's chagrin.