Resurrection of Jake the Snake 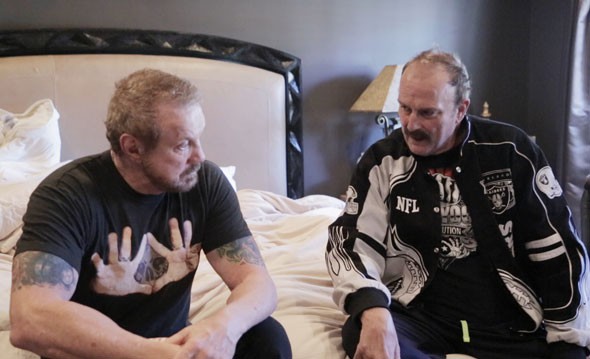 Opener of the 2015 Slamdance Film Festival THE RESURRECTION OF JAKE THE SNAKE tells the story of the legendary wrestler's struggles with alcoholism and drug abuse. During his wrestling career Jake "The Snake" Roberts was both feared and admired, appearing in the wrestling ring with his signature snakes, most famously a python named Damien. Opening up about his troubled past and ongoing struggles with addiction, Jake entered recovery in 2012 when he moved in with wrestler Diamond Dallas Page to train and get back into shape. In Steve Yu's tender documentary, follow Jake's path to recovery as he tries to reclaim his life and reform relationships with a family that seems to have given up on him.

DIRECTOR BIOGRAPHY:
Steve Yu is a first time filmmaker.  His relationships with his subjects results in an intimate portrait.

press for Resurrection of Jake the Snake

"Gritty and the demons are very real."

Steve Yu (Director) and Jake "The Snake" Roberts in Attendance