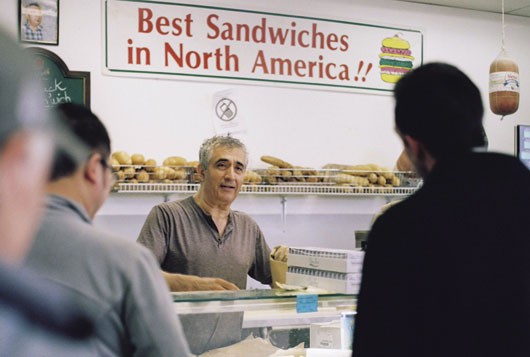 Deli owner Salam Kahil is an art collector, a former male escort, an amateur musician, and a sandwich maker to the homeless in Vancouver’s poorest neighbourhood, but his true passion is talking about blowjobs. THE SANDWICH NAZI follows Kahil as he struggles to come to terms with aging, failing health, and a past that forced him to flee his home in Lebanon as a child. Yet, in something of a surprise twist, the man he has become loves people very deeply. It’s clear in every moment that we see him at the deli, that he gets so much joy out of the company of the people around him. Salam has managed to channel all of this pain from his youth into some of the funniest anecdotes and stories that you’ll ever hear. THE SANDWICH NAZI is about finding a new family when the one you’re born with doesn’t work out.

Lewis Bennett is a director and editor based in Vancouver. His short comedic documentaries have screened at film festivals such as Slamdance and TIFF and he was a recent winner of the A&E Short Filmmakers Award for Best Film at the NSI Online Short Film Festival. His feature-length documentary debut, THE SANDWICH NAZI premiered at SXSW 2015.

press for The Sandwich Nazi

"The subject ... Is one of those classic obnoxious-in-a-lovable-way eccentrics."