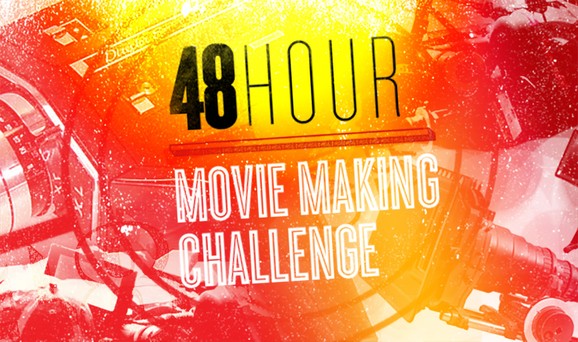 After a few years hiatus, the 19th Calgary Underground Film Festival is once again challenging you to make a short film as part of our 11th CUFF 48-Hour Movie Making Challenge. This year, we have partnered with NUTV!

The completed shorts will be screened as part of the annual film festival, which runs April 21 - May 1, 2022

You will randomly be given a GENRE, PROP and a LINE OF DIALOGUE to include in your film.

All creativity: writing, shooting, editing and adding a musical soundtrack, must occur within the 48 hour window beginning Friday evening at 7pm and ending Sunday at 7pm. The event is limited to 24 teams, and based on the first 24 teams to register with full payment so please register as soon as you confirm your team to guarantee acceptance. The festival screening will have a live jury to determine the award-winning shorts.

There will be prizes awarded to the top two teams selected by our jury as well as an audience choice award.

The 48-Hour Challenge is for both first-time filmmakers through to experienced directors. Anyone can participate.

1. Completed shorts MUST be uploaded to our webcargo link, with the upload completed no later than 7pm on the Sunday April 3. Please make sure you know how long the upload can/will take. Your film file must be clearly labeled with your team name: teamname_CUFF48

2. FINISHED FORMAT
As a self-contained full resolution QuickTime file (.mov), with no proprietary codecs uploaded to the webcargo link provided closer to the date.

4. ASPECT RATIO
All films are to be shot at a 16:9 aspect ratio. Everything will be packaged within a Flat (16:9) container for playback. Eg. Scope images will be letterboxed.

5. During the official competition period, all creativity will take place, including but not limited to: Writing the script, Rehearsing, Shooting, Editing, Graphics & Visual Effects, Sound Design & Music. Nailing your genre is essential.

7. RUNNING TIME
The length of your short, including introduction and closing credits, can be anywhere between 2 - 5 minutes. Total combined credits can be no longer than 30 seconds. Do not feel like you need to use the full time allotted. Shorter can often work out better!

8. All cast & crew must be volunteers.

9. LATE FILM ENTRIES.
Films received on Sunday after 7pm will be screened but are not eligible for any juried awards. To get your ineligible film screened you MUST hand something in by Sunday 10pm. Late entries will still be eligible for an audience award. Anything arriving after 10pm will be disqualified.

10. ABSOLUTELY NO ADVANCE SCREENINGS OR CHEATING.
Any team found to have cheated in some way, will be disqualified from any award and the screening. There is no exception to advance screenings of your film. Your short must only be premiered at the CUFF screening. This means NO cast and crew screening either. Please just tuck it away and save it for the event. Team leaders will be made responsible. It is way more fun this way if your film is a premier and the event is sold out. We promise.

11. After your film has been screened as a part of CUFF'S 48 Hour Film Challenge you are free to use it as you please. If you are proud of the film, we strongly suggest submitting it to other film festivals all over the world. We have programmed shorts that were created for other 48 Hour film challenges in previous years.

12. Any type of video or film camera may be used but we strongly suggest you shoot in HD to help make your project look as good as possible. There is no limit to the number of cameras that can be used.

13. PRIZES
There will be prizes awarded to the top two teams selected by our jury as well as an audience choice award.

14. Have fun and make the best film possible!!

When is the screening for the 48-Hour finalists?
During the 19th Calgary Underground Film Festival, which is April 21-May 1, 2022. Exact date is Sunday April 24. Time: TBC
Can I hand in my short after the deadline?
Yes you can – however it WILL NOT be eligible for any juried awards only the audience award at the screening if delivered after 7pm.
LATE ENTRIES WILL BE ONLY ACCEPTED UNTIL 10PM ON April 3 and will be screened with the package at the festival - subject to space availability.
When do we find out if we've successfully entered?
You are all good to go once you have filled out the registration form and made a payment.
What is the Entry Fee and what is it used for?
The entry fee is $60. This is to cover our basic costs of the event and also provides the prizes and cash for the winning teams.
Can I hand in a rough of my short before Sun 7pm and then switch it for a final copy at the last second?
No you cannot.
This is a time challenge and we will judge what is submitted on time.
Can I put my short up on YouTube or some other site?
Not before the screening.
After the scheduled screening you can do whatever you like with your short. The short time delay between the shoot and the screening is needed to get your films transferred to our exhibition format as well as have them watched by the special guest juror.
We want to have all our viewing experiences being a first for the audience as it makes the screening that much more exciting. If you do decide to host your short before the final you will be disqualified from the competition.
Can I compete if I don't live in Calgary?
Yes you can!
We can email you your elements to include in the film.
You'll also need to have your final version uploaded by 7 PM MST on the closing Sunday.
Who are these people known as the Judges?
The Judges are a range of industry professionals who are highly regarded in the film and TV industry. The judges for this year are TBA but we assure you the special guest judge will be someone you want to impress!
How do they Judge the films?
They look to see how well teams have stayed true to their genre and how they've integrated the random elements (prop & line of dialogue) into the finished film; As well as innovative story and scriptwriting, entertainment value, directing, acting and production value of the finished project. The ultimate goal for each filmmaker is to make a short film that stands on its own outside of the competition but obeys all the rules of the challenge.
What are the awards?
There will be two jury awards as well as an audience choice award. Only films handed in on time are eligible for any juried awards.
Can a team who wins a jury award also win an audience award?
Yes indeed.
What is the duration of the films?
They must be a minimum of 2 minutes and a maximum of 5 minutes long, including credits.
Can I use any existing footage not shot in the weekend?
No stock footage or footage shot or created at another time may be used.
Can pre-recorded music be used?
This can only be used if it is purely incidental background material and not a focal point for your short. If you want the short used for more than this CUFF screening, and may be submitting it to other film festivals, you may want to consider using an original soundtrack.
Can I use animation or digital effects?
Animation and digital effects are permitted, but must be created during the 48 hour time period.
NOTE: The person who fills out the registration form will be the team leader and point of contact.