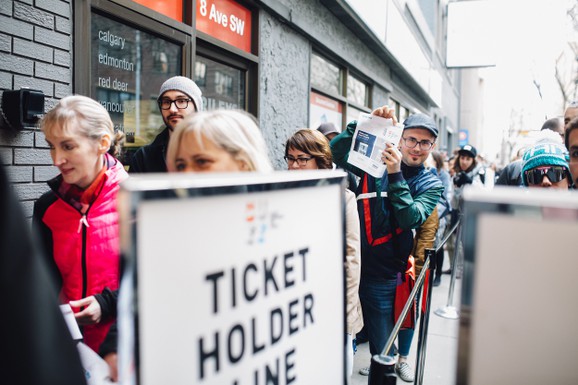 In advance of the full lineup announcement, CUFF.Docs wants to give you a sneak peak of some of the exciting programming we have in store for the fifth annual documentary festival. We're thrilled to announce the first of the 13 feature documentary films screening at this year’s festival: DON'T BREAK DOWN: A FILM ABOUT JAWBREAKER.

We have partnered with The Fifth Reel to program this profile of the influential American punk rock band Jawbreaker.  The three band members along with Billie Joe Armstrong, Steve Albini, Jessica Hopper, Graham Elliot, Chris Shiflett, Josh Caterer and more reflect on their "rags to riches to rags" story and lives after the band called it quits.

CUFF.Docs grew out of both a desire to bring more international documentaries to Calgary, and a necessity. We were seeing so many great documentary films submitted to our annual Calgary Underground Film Festival, and through attending film festivals worldwide, but we just couldn’t fit them all in to one event. We saw the appetite for documentaries in this city was huge; we had people ask us repeatedly for more, or for a documentary festival – so we finally decided to go for it.

We will be heading into our 5th year this November 16-19, 2017 and will showcase the best in non-fiction films, which have not yet had an opportunity to screen in Calgary. The festival screens 12 full-length features, as well as shorts, varying in subject, style and genres within the art form.

CUFF.Docs is the perfect place for anyone with the same intrigue and interest in factual content as we have. We’ll bring guests with the films, and plan for a unique CUFF-experience with the festival, and the films we present.

We aim to promote art and encourage dialogue.

If you are interested in knowing more about CUFF.Docs, as either a filmmaker or sponsor, please email us at cuff@calgaryundergroundfilm.org.