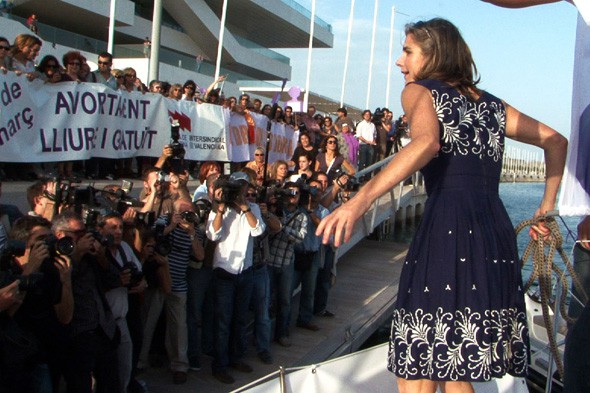 Doctor Rebecca Gomperts sails a ship through offshore waters providing abortions to women with no legal alternatives. Horrified by the realities created by anti-abortion laws around the world, Rebecca transforms a wildly improbable idea into a global movement. Her project, Women on Waves, begins as flawed spectacle, faced with governmental, religious and military blockade. But with each roadblock comes a more refined mission, until Rebecca realizes she can use new technologies to bypass law – and train women to give themselves abortions using WHO-researched protocols with pills. From there we witness her create an underground network of emboldened, informed activists.

DIRECTOR'S BIOGRAPHY:
Diana Whitten (director/producer) has worked in film and television direction, production and design for the last decade. She founded Sovereignty Productions in 2008 and was the Director of Communications at Ford Foundation International Fellowships Program. VESSEL, her first feature film, premiered at South by Southwest Film Festival and won the Audience Award in the Documentary Competition, as well as a Special Jury Award for Political Courage.

"An intriguing story passionately told, shot through and through with activist zeal."

"A fast-paced, heart-thumping adventure... a must see"

The Secret World of Foley

A journey into the little known world of Foley artists, who bring films to life by adding sound effects in post-production.