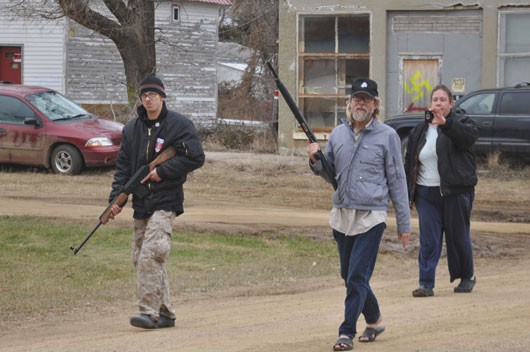 Leith, North Dakota is a registered ghost town of 24 people. In 2012, an outsider named Craig Cobb moved in and started buying up property. The notorious white supremacist was plotting a takeover of the city government, and soon a group of fellow white supremacists moved in to aid Cobb in his efforts. As Cobb’s behaviour becomes more threatening, tensions soar, and the residents desperately look for ways to expel their unwanted neighbour. Offering a glimpse into a town struggling for sovereignty against one man’s extremist vision, WELCOME TO LEITH was filmed in the days leading up to Cobb’s arrest for terrorizing the townspeople and his subsequent release from jail six months later.

Christopher K. Walker is an award-winning filmmaker whose directorial debut WELCOME TO LEITH premiered at the 2015 Sundance Film Festival, going on to screen at SXSW, Hot Docs, AFI Docs, and many others. He also edited and produced FLEX IS KINGS, edited the Columbia duPont award-winning film TRIANGLE: REMEMBERING THE FIRE, and edited the Emmy-nominated HARD TIMES: LOST ON LONG ISLAND for HBO.

Michael Beach Nichols is an award-winning Brooklyn-based filmmaker and recipient of a Jerome Foundation Grant. His critically acclaimed second feature film, WELCOME TO LEITH debuted at the 2015 Sundance Film Festival, before going on to screen at SXSW, Hot Docs, AFI Docs, and many others. His 2013 feature debut FLEX IS KINGS premiered at the Tribeca Film Festival. Previously, he directed the viral short documentary DELIVERY, as well as directed the web series BKLYN FLEX for Ashton Kutcher’s Thrash Lab and was part of the Peabody award-winning producing team behind Sundance’s 11-hour docuseries BRICK CITY.

press for Welcome to Leith

"A stunning portrait of first amendment rights pushed to their extremes."

"A gripping you-are-there portrait of a community under siege… as engrossing as a fictional thriller."