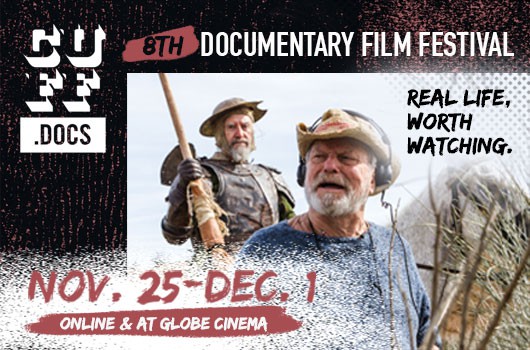 CUFF.Docs runs November 25 – December 1 at Online & at Globe Cinema. With a selection of 20+ films, this year's CUFF.Docs will be our biggest one yet. Most selections will be available to stream on-demand between November 25 – December 1 and will also play at Globe Cinema (in-cinema screenings will take place November 25-29). There are a few exceptions where a film may only stream online or only play in-cinema. As always, we’ve curated a lineup of the best non-fiction films on the festival circuit, including features, shorts, varying in subject, style and genres within the documentary art form.

With the new hybrid festival, we’ve made some changes to our passes. Please read the below details to see how each pass type works to ensure that you’re buying the pass that suits your needs best. If you have any questions about passes please email cuff@calgaryundergroundfilm.org

Mark your calendar – we'll be announcing the CUFF.Docs 2020 lineup and putting tickets to all films on sale Monday, November 9 at 9am! Learn more about CUFF.Docs Documentary Film Festival.

Want to watch some films from home and some in-cinema? With this pass, you’ll have access to the full online portal to stream films at your convenience. You’ll also have the opportunity to claim x1 ticket to each film that we’re showing in the cinema. Capacity at Globe Cinema is reduced to 20%, so tickets are limited. We’re expecting many films to sell out, so if there’s something that you want to watch in-cinema, you must claim your ticket in advance starting on Monday, November 9.

If you’re planning to watch the majority of films solo from the comfort of home, this is the pass for you.

Will multiple people be watching from your household, or do you plan on having friends over to watch, or hosting watch parties? If so, this pass is your best bet.

Planning to check out a few films in-cinema and watch some from home? With a 5-film multi-pack, you have the flexibility to do both. After you purchase a multi-pack you must claim tickets for each film that you want to watch. Multi-packs are shareable so, for instance, you can claim multiple tickets to one in-cinema film.

If you stream films from home with friends or are planning any watch parties, consider making a small donation to CUFF to help us cover the costs of the festival.