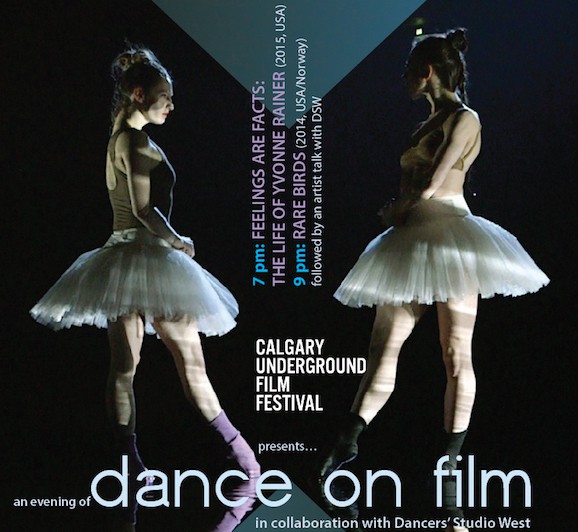 On Saturday, February 20 join CUFF in collaboration with Dancers' Studio West (DSW) at Globe Cinema for an evening of dance on film. Featuring two feature films, local shorts and an artist talk by DSW.

About the Films
FEELINGS ARE FACTS: THE LIFE OF YVONNE RAINER (Dir. Jack Walsh, 2015, USA, 83 min) Screens at 7 PM
The only documentary to focus solely on the life and career of Yvonne Rainer, FEELINGS ARE FACTS: THE LIFE OF YVONNE RAINER tells the riveting story of one of America's most important artists. In 1962, as a founding member of Judson Dance Theater, Rainer revolutionized modern dance by introducing everyday movements like walking and running into the dance lexicon. Abandoning choreography in the ‘70s, Rainer introduced narrative techniques into American avant-garde film, turning that genre on its head, too. In FEELINGS ARE FACTS, we follow Rainer, now 80 and returned to choreography, as she continues to create vibrant, courageous, unpredictable dances that invite audiences to question basic assumptions about art and performance.
Official Selection: Berlin International Film Festival 2015, Vancouver Queer Film Festival 2015
Watch the Trailer

RARE BIRDS (Dir. T.M Rives, 2014, USA/Norway, 59 min) Screens at 9 PM
RARE BIRDS is an intimate look at creativity. Following choreographer Alexander Ekman during production of A Swan Lake (Norwegian National Ballet), the film tracks dance creation from ideas to hard reality. The house’s army of artists and workers took on unique challenges, requiring new approaches to costume and sets, and the installation of a 6000-liter lake onstage. A portrait of Ekman as well as a celebration of the state of the craft (A Swan Lake became a sensation, nominated for the 2014 Prix Benois de la Danse), RARE BIRDS reveals the challenges and pleasures of production in a major institution.
Official Selection: San Francisco Dance Film Festival 2015
Watch the Trailer

GRETEL IN DARKNESS (Dir. Zahra Shahab, 2016, Canada, 12 min) Preceding RARE BIRDS
An otherworldly female tribe stumbles upon a golden dress and each member is seduced by its promise of superficial power.  Created as a response to a Jonas Burgert painting along with Gretel’s experience with the witch in the sugary house of candy in the Brothers Grimm tale

We would like to thank our Funding Partners: AFA & CADA