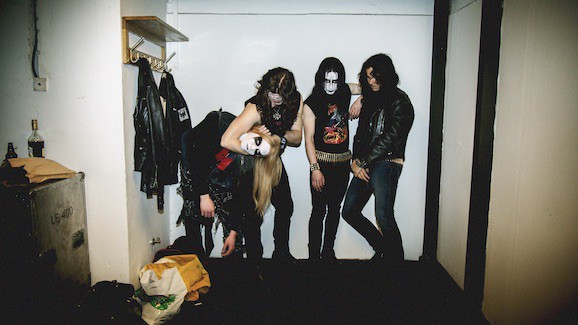 OFF THE CUFF: LORDS OF CHAOS

The Calgary Underground Film Festival presents a one-night screening LORDS OF CHAOS, the story of True Norwegian Black Metal and its most notorious practitioners – a group of young men with a flair for publicity, church-burning and murder: MAYHEM.

SYNOPSIS
The story of True Norwegian Black Metal and its most notorious practitioners – a group of young men with a flair for publicity, church-burning and murder: MAYHEM. Oslo, 1987. Seventeen-year-old Euronymous is determined to escape his idyllic Scandinavian hometown and create “true Norwegian black metal” with his band, MAYHEM. He’s joined by equally fanatical youths – Dead and Varg. Believing that they’re on the cusp of a musical revolution, the group gets even darker driven by the black metal dogma to spread evil. They begin burning down churches throughout the countryside and stealing tombstones for their record store. But when the press catches up with them and Euronymous takes more credit than he’s earned for the group’s violent acts, Varg, fresh out of jail, arranges a dark encounter to settle the score and ultimately determine who the darkest black metal musician is.​

LORDS OF CHAOS is classified (18A) for Gory Brutal Violence, Sexual Content

"Lords of Chaos puts the tale on a big stage, transforming the early days of "true Norwegian black metal" into an energetically entertaining account of partnership, identity, and betrayal even as it includes all the (very literally) gory details." – Birth.Movies.Death

OFF THE CUFF is a year-round series presented by the Calgary Underground Film Festival. For those films we just couldn't make work with our festival dates, we go off the CUFF. LORDS OF CHAOS will open theatrically in Canada in 2019.