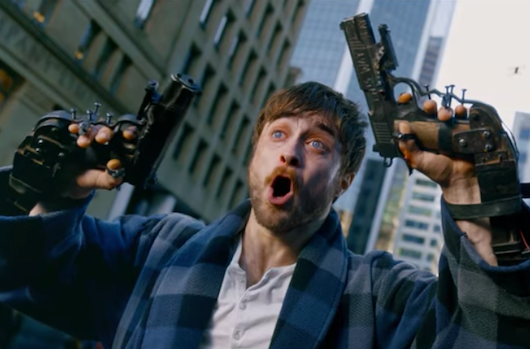 Off the CUFF: GUNS AKIMBO

SYNOPSIS
Miles (Daniel Radcliffe) is a socially awkward, easily intimidated loner who spends his days in a deadend job, pining for his beautiful ex-girlfriend. His mundane existence is turned upside down when he finds himself enrolled on a dark net website that forces complete strangers to fight in a city-wide game of death, so that their gladiatorial battles can be live-streamed worldwide to a fanatical, blood-lusting audience. Miles’s lifetime of running from his problems initially pays off when he manages to elude Nix rather than fight. But when Nova is kidnapped, he must stop running and overcome his fear to fight for the girl he loves. An inspired, contemporary take on the iconic action movies of the '80s and '90s, GUNS AKIMBO is an adrenaline-soaked balls-to-the-wall action comedy in the tradition of KICK-ASS, THE TERMINATOR and DEADPOOL.

"Watching GUNS AKIMBO feels like having someone toss a bucket of cocaine and bullets right into your stupid face, and I mean that in the best way possible." – Birth.Movies.Death

"A spectacularly fun and exciting time whenever the needle drops." – RogerEbert.com