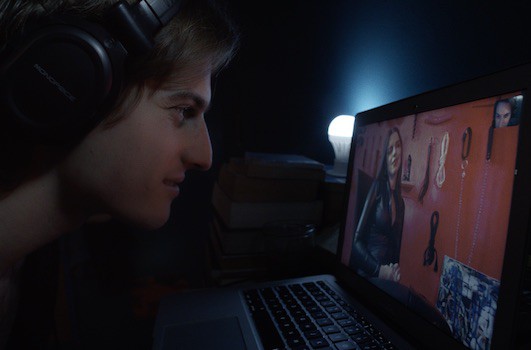 Off the CUFF: PVT CHAT

Our Off the CUFF series is heading online, as we bring the best new genre-defying films straight to your home. First up is the kinky dark comedy PVT CHAT about a lonely internet gambler who becomes fixated on a cam girl from San Francisco.

When: Stream available from Feb 5 @1am until Feb 11 @11:55pm MST
Rental Details: Once you start watching your stream you will have three days to view the film
Tickets: $8 USD (approximately $10 CAD)
BUY NOW

SYNOPSIS
Jack is a lonely internet gambler living in New York City. He quickly becomes fixated on Scarlet (Julia Fox, UNCUT GEMS) – a cam girl from San Francisco. As Jack (Peter Vack, 2017 CUFF Selection ASSHOLES) learns more about Scarlet, he discovers her unrealized talent as a painter and begins to fall hard for her. His obsession reaches a boiling point when fantasy materializes in reality and Jack sees Scarlet on a rainy street in NYC Chinatown. While Scarlet is clearly hiding her whole truth, milking Jack’s wallet in the process, she also seems to develop genuine feelings for him. Jack has to find out – is their emotional connection real or is he just being taken for a ride?

REVIEWS
"PVT CHAT deserves a spot in the echelon of great movies about sex, such as SECRETARY and SEX, LIES, AND VIDEOTAPE." – Film Threat

"Deliberately unpolished in its approach, and cheerfully uninhibited." – Screen Daily