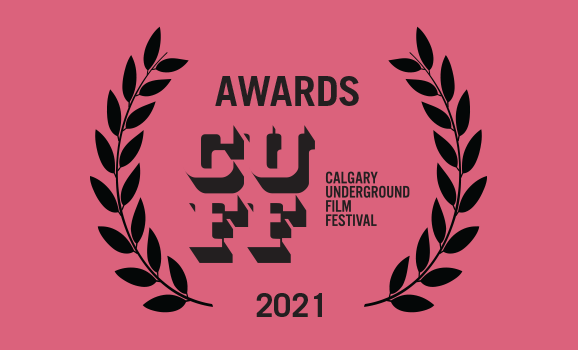 Compelling and intimate, this story of struggle and redemption is beautifully told by Joe, the film’s fascinating subject and narrator. This team, including director Amar Chebib and cinematographer Liam Mitchell, has crafted a tightly executed and powerfully moving story of Indigenous intergenerational trauma, stirringly conveyed through Joe’s face, and his voice.

This intensely engrossing film showcases the exciting and highly kinetic style of Tank Standing Buffalo, and captures a searingly personal experience within the Canadian criminal justice system and the need for human connection.

This director wrapped us into their candy-coloured world of lust, longing, jealousy, and devotion – and it was delicious. The feat of executing the audacious directorial vision of PLAYDURIZM has us foaming green at the mouth for what Gem Deger will serve audiences next.

It's a rare film that can bring a whole new definition to Squirrel Friends. For its one-of-a-kind vision and commitment to the art of puppet master decapitation, the jury wishes to extend an Honourable Mention to the magnificently murderous and highly hilarious FRANK & ZED.

If an actor’s job is to simply go up there and tell the truth we would be remiss not to highlight Zachary Shultz, who delivers a fearlessly truthful performance as Ernie Burroughs in ITCHY FINGERS. Shultz brings a profoundly human vulnerability to a man too afraid to show his own, and for that, we are delighted to award him this Special Prize.

In another year that has seen movies - and movie-lovers - distanced as a result of the pandemic, one film stood apart from all the others. Directors' Lucy Harvey and Danielle Kummer's ALIEN ON STAGE perfectly captures the sublime spirit of fandom in a wildly charming chronicle of a dedicated, enthusiastic pantomime troupe's (comprised of the most theatrically-minded bus drivers to ever emerge out of Dorset, England) attempt to bring their handmade, amateur production of "Alien" to London's West End. As much as this play-within-a-play celebrates the passionate tenacity of its subjects, it also acts as a very "meta" reminder about the reverberative impact of the collective cinema-going experience on audiences at a time when the theatrical experience itself has been transplanted into the virtual space. The deft story-telling at play in ALIEN ON STAGE manages to underscore the unifying power of shared, communal cinema while, simultaneously, transcending it.

The jury also wanted to provide an Honourable Mention to Jasmine Stodel's KID CANDIDATE, a documentary about an unlikely (yet charismatic) political outsider who inexplicably manages to turn his wave of viral notoriety into an earnest run for municipal office, exposing tensions between lower-income constituents and their elected leaders against the backdrop of systemic, small-town corruption. Hayden provides inspiration throughout the film – he loves his hometown of Amarillo TX and is determined to give a voice to the under-privileged.

Finally, we wanted to highlight Daniel Hymanson's SO LATE SO SOON, a film that quietly observes the intimate domestic life of aged, eccentric Chicago artists Jackie and Don Seiden, a couple facing inevitable change and transition following 50-plus years of marriage. Their quirky, idiosyncratic dynamic is the star of the film, colouring Hymanson's heartfelt portrait of their life through the inescapable lens of time, the non-linear juxtaposition of his footage set against that of them in years prior. SO LATE SO SOON is a  tribute to the deep and complex bonds of matrimonial companionship, a reminder that the very humanity of our elders, who are so often overlooked, is too often treated as expendable.

James McNally: Festival Director at Shorts That Are Not Pants
James McNally is the founder and festival director of Shorts That Are Not Pants in Toronto. He's worked in programming and festival logistics for TIFF, Hot Docs, Sundance, Hamptons International Film Festival, and the Scruffy City Film and Music Festival. He has also worked in film distribution with KinoSmith Inc., and as a film blogger, establishing Toronto Screen Shots in 2007. As a writer, he has been a regular contributor to Short of the Week and the National Screen Institute.

Lindsay Peters: Head of the 'From Our Dark Side' Incubator Program at Women in Film & Television Vancouver
Lindsay Peters has over 10 years of experience in genre film development & festival management. As the Executive Director of Frontières, Lindsay expanded a 3-day co-production market at the Fantasia International Film Festival into a major multi-step genre industry hub with the Marché du Film – Festival de Cannes. She is currently running the From Our Dark Side incubator program for Canadian women genre filmmakers out of Women in Film & Television Vancouver.

Brendan Hunter: Actor
Brendan Hunter is an Alberta born and based actor and producer with credits including DRAWING HOME and the AMPIA Winner LLOYD THE CONQUEROR. He is also a notable voice actor with thousands of episodes of animation, video games, audio books and commercials. Brendan has a long history in independent filmmaking, starting with shorts: making movies with friends that he eagerly shares with the community.

Liane Cunje: Manager of Festival Programming at the ‎Toronto International Film Festival and Board Member at the Miskatonic Institute of Horror
Liane Cunje is a Manager of Festival Programming for TIFF. After completing a Film Studies degree from Concordia and working in TV development in Montreal, Liane moved to the UK and completed an MA in Producing Film & TV. There, she worked as Operations Executive for cult label Arrow Video. A former Programmer with the Overlook FF, she features on international juries and panels, and is a board member for the Miskatonic Institute of Horror Studies.

Lee Paula Springer: Filmmaker & CUFF alumnus
Lee Paula Springer is an award-winning screenwriter and director from Montreal. She is one half of the writing/directing team behind the feature film DEAD DICKS, which screened at the 2020 edition of CUFF. She promises to be more discerning about selecting a winner than she was about picking the title of her own film.

Bryan Glick: Distributor and Founder of GQue Films
Bryan Glick (They/Them) is just your typical non-binary, queer agnostic Jew. They are the founder & head of GQue Films, which is the only non-cis owned and operated film sales/distribution company in the world. Their current films include KEYBOARD FANTASIES: THE BEVERLY GLENN-COPELAND STORY and WORKHORSE QUEEN which are both screening at CUFF.

Rachel Fox: Senior Programmer at The Rio
Rachel Fox is the Senior Programmer at Vancouver’s Rio Theatre, one of Canada’s most renowned independent arthouse cinemas. In addition to ensuring a dizzyingly diverse roster of content – everything from niche documentaries or indie narrative features, to cult-classics, to one-off secret screenings or special events featuring filmmakers either in-person or Skyping in from far-flung locales – she has also produced an endless stream of live events featuring the likes of Tenacious D, Kevin Smith, cast members from Degrassi Junior High, and Tom Green, and is the Creative Director of the Rio's own annual genre-fest, the Rio Grind Film Festival.